Commonside Pale Ale is one of our longest-standing brews, rooting right back to our conception in 2013.

It’s a perfectly balanced brew that showcases everything we fell in love with from the US brewing scene and more. Outrageously crushable with a caramel biscuity base and delicate herbal notes, Commonside is boosted with a heady mix of citrus, pineapple and pine from its all American hop blend.

Crack open a can and let our founder Adrian explain the inspiration and development of Commonside Pale Ale.

“I am not ashamed to say that Commonside Pale Ale started life as a Sierra Nevada Pale Ale clone.

I found a recipe in a book called Clone Brews by Tess Szamatulski back in my homebrewing days and went from there.

If you’ve never had the pleasure of tasting Sierra Nevada Pale, then you have not only missed out on one of the most perfect pale ales of all time, but you’ve also missed out on a crucial part of craft beer history. Sierra Nevada was one of the better-known breweries leading the way at the height of the US craft beer revolution in the ’90s. Their Pale Ale has been a source of inspiration for breweries worldwide with BrewDog, Allagash, and of course ourselves naming it as a key inspiration point in the early days. 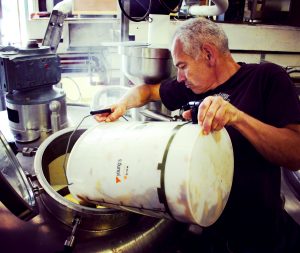 Back in the ’90s in the UK, beer had become a shadow of its former self. A soulless low abv (and low flavour) nectar, dominated by the likes of Heineken and Molson Coors.

Luckily for me, I had the opportunity to spend a substantial chunk of my time in the US working as a movie soundtrack producer. I remember drinking my first Sierra Nevada Pale Ale in 1996 whilst working on a film in LA.

In all honesty, I don’t remember the film, but I do remember that beer. The invigorating citrus pine taste and the floral, spicy aroma synonymous with Cascade hops. I was a changed man! 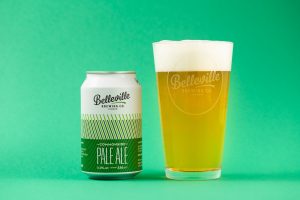 Commonside has come a long way since then as has the craft beer industry. Out went the Light Crystal Malt and in came Extra Pale (the fashion today being for very pale ales).

Although we still use plenty of Cascade on the hop front, Cluster has bowed out, and in its place, we’ve added in heaps of Ekuanot for a big pineapple and lychee hit.

We’d previously used US Magnum hops as they were the closest thing to Horizon, which Sierra Nevada used. Interestingly, in 2014 we had to switch to Nugget instead as I was told Sierra Nevada had bought up all the US Magnum stock – I guess we can let them have that one!

Although inspired by the US’s sunny climes, Commonside takes its name from our slightly less sunny neighbour, Wandsworth Common, by which unsurprisingly, we sit just alongside.”

You can purchase Commonside Pale Ale from our online shop. Click here to buy!